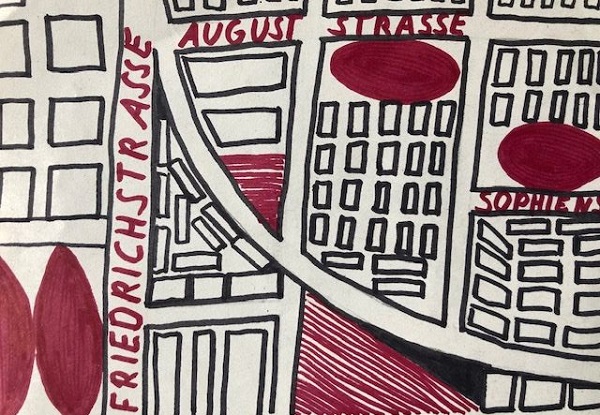 Culture in Mitte! Let’s stroll past historic venues of jazz among other things, such as the Berlin Ensemble or Clärchens Ballhaus!

Culture in Mitte- in the Scheunenviertel, the so-called underworld: Between 1918 and 1933, the Weimar Republic stumbled from one crisis to the next one. She was controversial and had more enemies than friends. But all of them were searching for distraction, just in what way?

In the “slum district” of the city, the Scheunenviertel, light girls allegedly were having fun with heavy boys and vice versa, or among themselves. Here were lots of little stories. And they became great theatre and and graniose cabaret!

Jazz band and Tap Dance were to be in this area too. How did the music get on? You had dancing mania. The war was over, the people had survived, and the monarch was gone! The American dances shaped the bustle. Often right next to it were separees, which were just as useful as well for love affairs as they were for trickeries.

Berlin’s cultural history in the middle of Mitte dares a humorous look in the spirit of the Berlin entertainment of the twenties.

Culture in Mitte however had its downsides: it was especially threatened by Anti-Semitism and its catastrophic effects! The majority of the inhabitants of the barn area had always been of Jewish origin. They had built and shaped the district. As cultural life in general! That gave rise to a lot of rumors and clichés. About creativity despite all.

So this part of Berlin’s cultural history also trys a more differentiated view on what was going on.

See as well: KIND OF GOLDEN – The New West